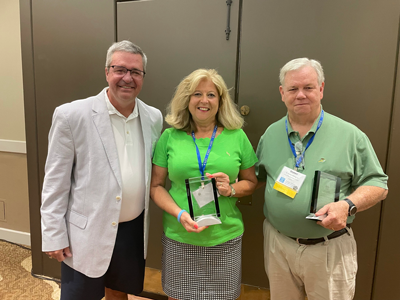 Staten Bitting, Jr. of Levy Sibley Foreman & Speir, Augusta, and his wife, Cindy, were honored with the President’s Award during the 2021 Annual Meeting. They were recognized for their combined efforts in helping organize and manage GDLA conference arrangements for the past decade. They’re pictured with outgoing President Jeff Ward (left). 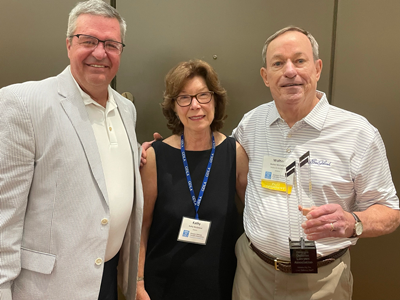 Walter B. McClelland of Mabry & McClelland, Atlanta, was honored with the Distinguished Service Award, the highest accolade given by GDLA, during the 2021 Annual Meeting. Walter served as GDLA President from 2001-2002 and continues to contribute as an ex-officio Board member. He’s pictured with his wife, Kathy, outgoing President Jeff Ward (left). 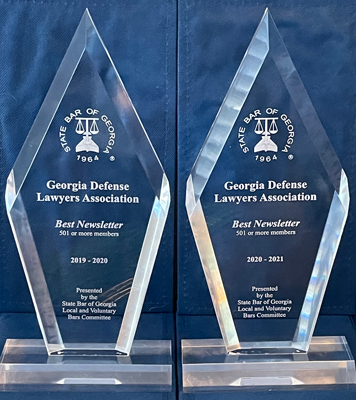 GDLA was recognized with back-to-back Best Newsletter Awards from the State Bar of Georgia in the category of local and voluntary bars with more than 500 members. The awards for 2019-2020 and 2020-2021 were both presented on June 11, 2021 during the State Bar Annual Meeting held at Wild Dunes Resort. Erica L. Morton of Swift Currie, Atlanta, served as editor-in-chief of the Georgia Defense Lawyer for both years.

GDLA is Committed to Advancing the Civil Defense Bar.

The Georgia Defense Lawyers Association (GDLA) is an association for all lawyers who practice law principally in the area of civil litigation representing defendants. The GDLA has always maintained an open membership policy and has welcomed into its membership defense lawyers of all backgrounds, regardless of gender, ethnicity, race or national origin.

The Georgia Defense Lawyers Association was founded in 1967 by a group of civil defense attorneys, who wanted to create a forum for networking outside of the office, courtroom and arbitration table.